Exiting Slovenia was a bit like the draw for the World Cup finals, putting your hand in an overly elaborate tombola and pulling out a random country that you can get to by train or plane. Thus the potential upset of Liechtenstein was flown over on the way to Zurich, Switzerland. Zurich was great for pretzels and quick connections onward by the very amazing Swiss rail network. An hour to Bern, an hour to Interlaken, half an hour up a valley to Lauterbrunnen, then another half hour by a cable car / mountain train combo to Murren, all with the smoothest of short connections. 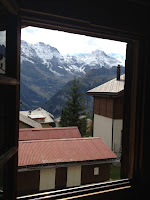 Murren, some 1600 metres up and squarely facing the peaks of Jungfrau, Eiger and Monch was as Swiss as a knife wielding cuckoo clock. A ski town in winter, summer presents a quiet and charming base from which to wander meadows, smell cows, and eat cheese. So, with my early start and wonderful train connections, I had an afternoon to do just that, taking a little cog railway up a further 200 metres to the wonderfully Germanic-sounding Allmendhubel, and embracing a sweeping ramble back through valleys and hamlets down to Murren. Jungfrau – over 4,000 metres high – creating its own break in clouds, and shining clear throughout the afternoon and into dusk. 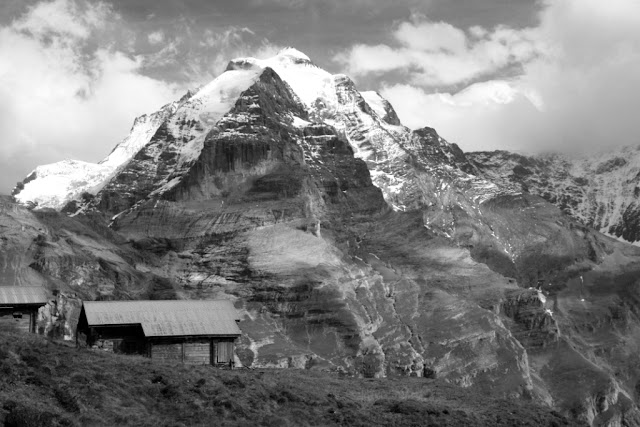 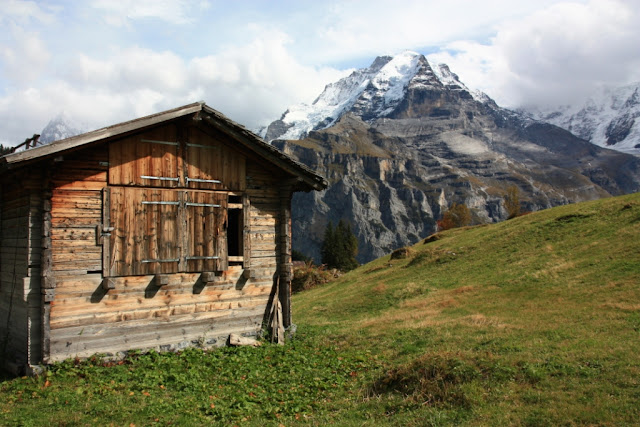 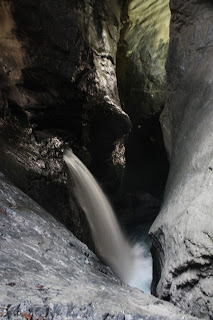 Clouds eventually spread onto Jungfrau as the sun faded and they struggled to lift at all the next day. It was therefore a day best suited to heading down the hills and into the Lauterbrunnen Valley. The scale of the mountains here are intense, plummeting down into the valley in a series of immense walls, from which waters often descend hundreds of metres. Some, such as the popular and nicely designed for visitors Trummelbach, cut their way through the mountain in a series of caves and crevices.  The sound of impressive force is matched by the impressive lift and viewing trail to several of the chutes. And there is an impressive array of cakes to choose from in the cafe at the bottom, let me tell you. 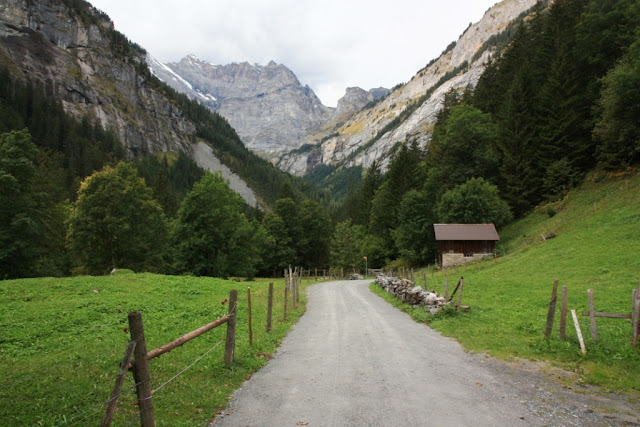 Later that day I went for another venture, heading out from Murren with the intention of cutting an undulating line north – hopefully with nice views of the Eiger and its dodgy north face – and then jumping on a little train back. But by time I completed the worst part of the walk – an ascent through forest – the weather was looking the wrong side of dubious and by time I headed back down again, Murren had almost vanished into cloud...


...so opening the curtains on my final morning was like waking up on Christmas morning as a seven year old. Onward travel was therefore immediately suspended and instead it was on to a cable car upward. That overnight cloud had also given the gift of fresh snow, settling only a couple of hundred metres above Murren and on the very same path I took on my first walk two days earlier. 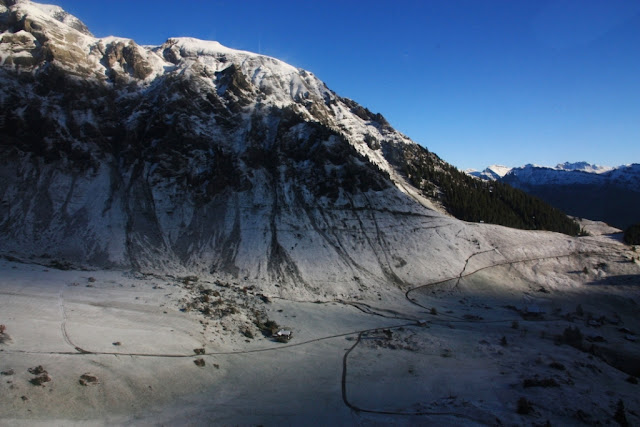 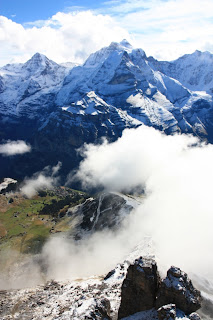 Destination was still a further thousand metres up, at Schilthorn, a rotunda perched on a piece of rock and allegedly famous for being in a James Bond movie. I believe On Her Majesty’s Secret Service. I think James Bond, played by that guy who no-one can remember...Lazyberry or something...was canoodling a hot chick in the snow and then some baddie came and did something like really bad and so he jumped on some skis and flew down the hill at great peril, pursued by more baddies, but it all ended up okay because the Queen was safe and James managed to comb his hair and pinch the arse of some other shiela before heading back to Queanbeyan for a root.

Anyway, despite this, the views from Schilthorn provide much more realistic drama, invigorating with clear blue skies and a fresh layer of powder, and fulfilling after the expectation that this was not possible. 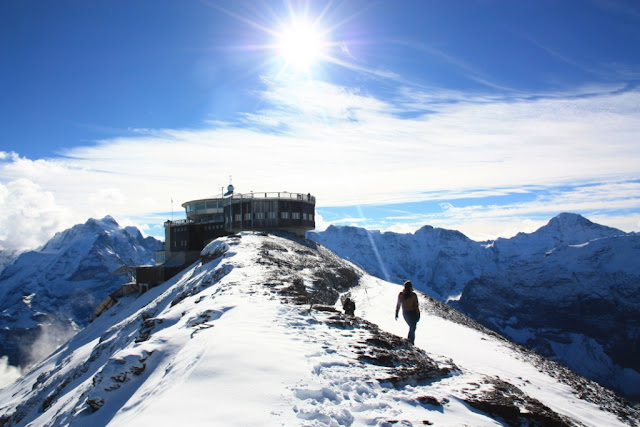 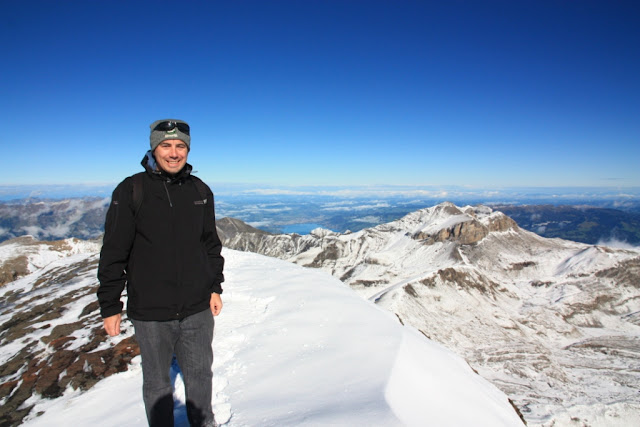 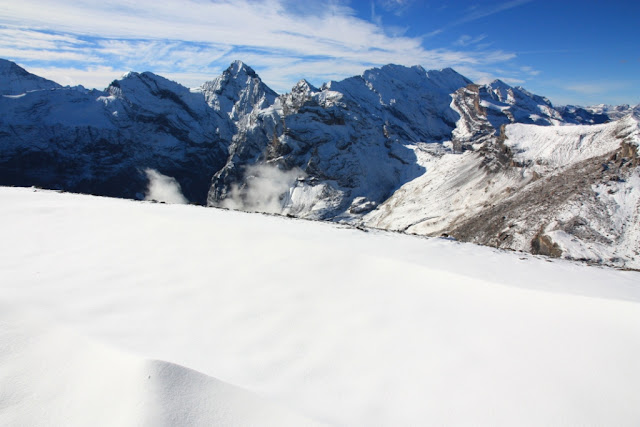 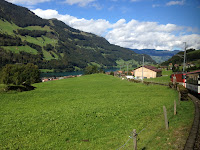 From such heights one has to descend, but what an agreeable descent it was all the way to Lucerne. From Murren it’s back along the ridge by train, down to the valley by cable car and a trundle alongside a rapid glacial river to Interlaken. From here it is necessary to take the Central Line, but not like any Central Line I have been on before. Lake after lake, a couple of mountain passes, cows and green fields, and blue rivers and little churches surrounded by wooden chalets. It is a chocolate box.


Not that things get any less sweet in Lucerne, which is so picture perfect in many ways that one instantly wonders how, but also surely questioning that dodgy things must be happening somewhere dodgy right? The British pub, which also doubled as a hotel in which I stayed a night, is surely the place to start. But no, apart from very expectedly overpriced pub food and equally clichéd Swiss-German pop band tinklings, even the hotel room was clean, modern, soundproof...

Lucerne has a great medieval core, and its iconic symbol is the Kapellbrucke, a covered wooden pedestrian bridge with slightly phallic tower (especially when baked and sold in Madeleine format). There was also a town wall with enough turrets and spires to keep you happy for a while, which I randomly found as the day came to a close, keeping me, as I say, happy until my overpriced pub burger at least. 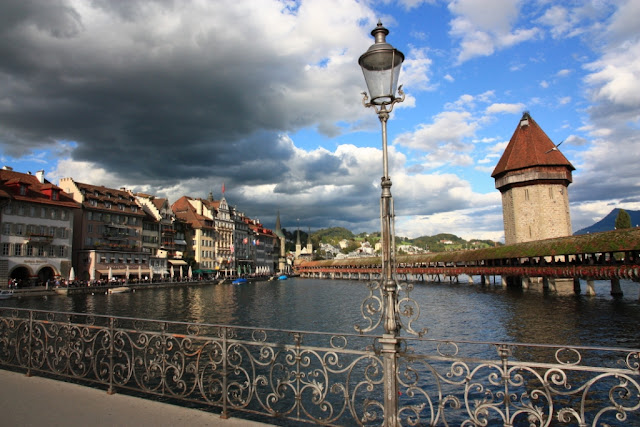 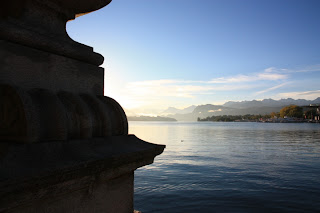 The next day, prior to cross-border rail travel, I had plenty of time to take to Lake Lucerne, hopping aboard one of its steamboats for a round trip to a town of random choosing – Vitznau. With sunshine and Swissness, these were very pleasant times. At Vitznau, the temptation of more mountains looms, but I just climbed a little hill for views of the lake, before heading back down to the watery goodness for a self made picnic of giant raclette pretzel, spicy sausage and, just for the hell of it, additional gruyere cheese. 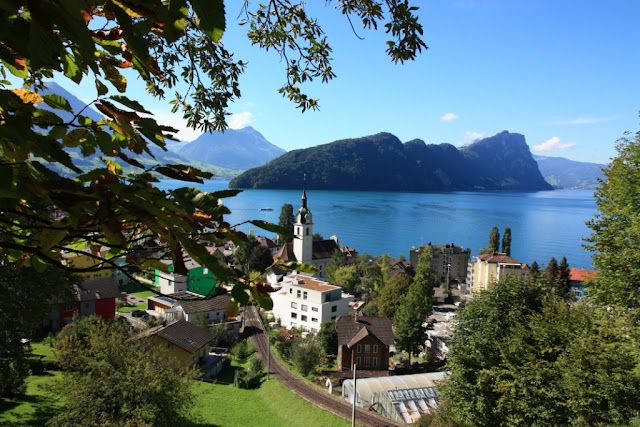 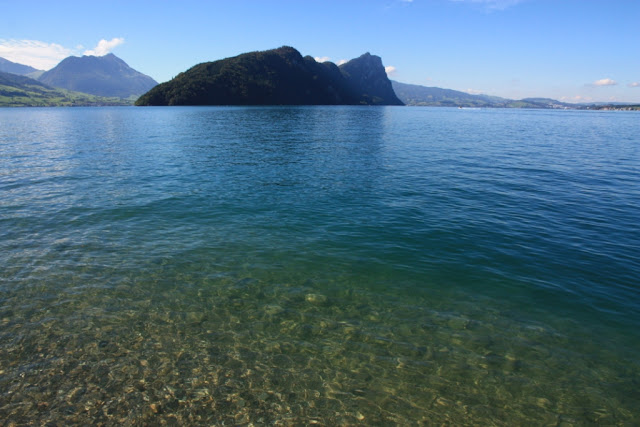 I was tempted to revisit Pretzel King at Lucerne station, but resisted and went for cake instead to take on my train to Italy. With Italy now on the agenda, things suddenly seemed a little more chaotic...a hot train, quite busy and noisy, spending money you don’t have, that kind of thing. But the scenery was still Swiss, carving through the narrowest of valleys and emerging in Lugano, where Switzerland became Italianate beside the lake. It looked stunningly beautiful; further down the line Como seemed chaotically beautiful, and then Milano was just stunningly chaotic. But I made it, all the way to little Vignate and friendship with meatballs. Ciao.
Posted by Neilio at 6:22 am