Away from the coast, the northeast corner of NSW and southeast Queensland is dominated by further World Heritage rainforest, running along ridges formed by a crater when Mount Warning underwent a big volcanic explosion many yonks ago. The region is also a fairly laid back kind of place, thanks in part to the beautiful surroundings but also I suspect the many little plantations nurturing coffee, 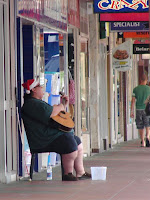 Lismore is one of the bigger towns and a charming little spot where I stayed overnight and took in some breakfast as big old Santa himself played a few tunes. A number of winding roads lead all over the place into the Hinterland, including Nightcap National Park, which, again is part of this world heritage hoo ha. 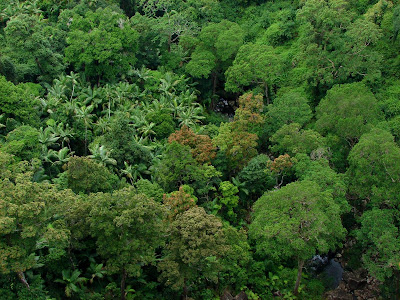 There are also a number of alternative towns, including Nimbin which is famed for its openness to potheads and stinky hippies and Uki, which is world famous for being Tidy Town and also serves a nice ‘Devonshire’ Tea. 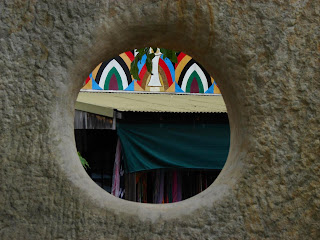 I camped at a great little site literally on the border of Mount Warning National Park, set beside a little river and with the birds and crickets for company

A little further up the road was the town of Murwillumbah, where I was able to replenish supplies and take in the landscape looking back towards Mount Warning and the lush surrounding area.

To cross the border into Queensland from here you can either go through nondescript coastal towns and the manic highways of the Gold Coast or, like I did, take a beautiful winding road alongside Lamington and Springbrook National Parks. 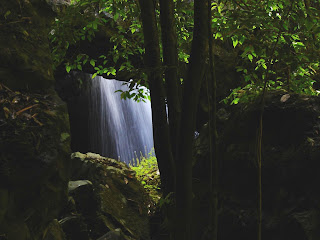 I crossed the border without incident (there was a tiny sign which I almost missed) and my first stop in Queensland was at Natural Bridge in Springbrook National Park. Here, a small cavern has been formed by a waterfall which offers picture postcard scenes. 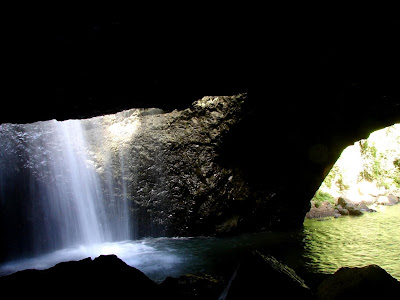 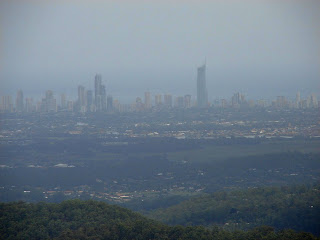 A larger section of Springbrook runs along a plateau, with views inland and to the coast, waterfalls cascading down to the coastal plains through more lush paradise. It is here, in a World Heritage listed ancient rainforest that you can see the plastic fantastic of the Gold Coast on the horizon from several of the lookouts, as well as the more natural environment. 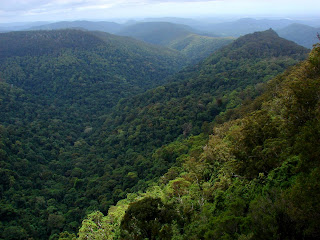 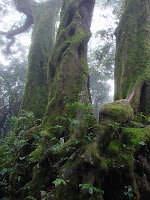 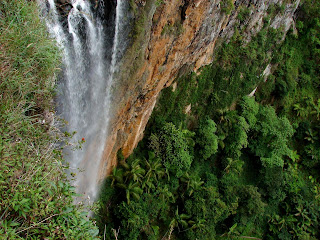 Springbrook has its very own waterfall way, with Purlingbrook Falls one of the most accessible. There are further falls along the escarpment, none more impressive though than Twin Falls, reached via another lovely walk through rainforest. Again, you can walk behind these falls to cool off from the walk down. 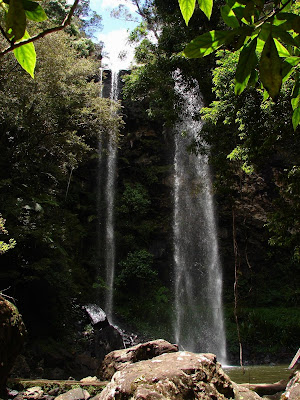 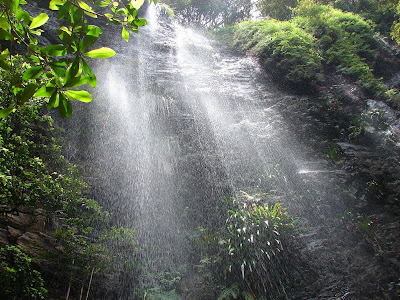 Springbrook NP also claims to have the ‘Best of All Lookouts’, which is worth the short detour, though often shrouded in the cloud. 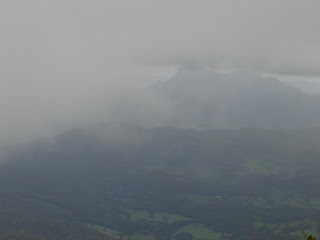 Show a little patience however and the cloud might just part a little! According to the sign at the lookout you can view the whole area shaped by the eruption of Mount Warning – in fact, if you look from satellite you can see the crater shape.

It is a bit odd to think that from the bottom of Twin Falls or the top of the Best of All Lookout you can be on a four lane motorway within 30 minutes or so, but the four lane motorway conveniently takes you alongside the Gold Coast, over the East side of Brisbane and up the aptly named Bruce Highway to the Sunshine Coast and Christmas, supposedly, at the beach.
Posted by Neilio at 5:42 pm