You're driving me in Spain 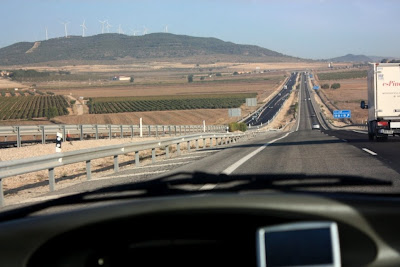 Once in a while, when I’m not tramping round random hills or taking pictures of a kangaroo for like the millionth time, an opportunity arises for a true adventure, a journey into the unknown, with risks and dangers, such as other people’s driving, funny language and the YMCA in petrol station forecourts. Proving travel is as much about the journey as it is the destination, somehow a 10 hour drive across Spain followed by a rocky 20 hours on a French boat from Spain to England across the Bay of Biscay formed a memorable and impressionable highlight.

There was some warm up for the journey, and when I say warm I mean warm... a joy to behold following rainy English send offs. Shorts and sand and seafood by the beach at La Mata. Enlivening enough to get me to put my trainers on and go for a run, anticipating the ridiculous amounts of saturated fat still to come. 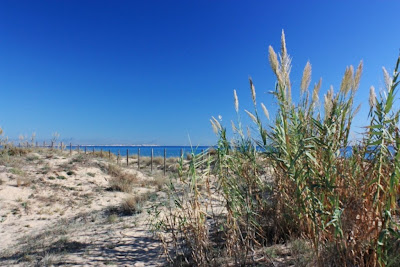 On the Wednesday morning then it was adios Quesada for me and the folks, my one block of Reblochon, a crate of wine, some stinky fags and several fancy dress outfits and accessories. Comfort in the fact that if we got lost we could have some cheese and wine by the roadside and play dress ups. But we wouldn’t get lost with a trusty sat nav, right?

The journey up towards Madrid sailed by without much of incident or excitement, arid hinterland mountains giving way to even drier dusty plains, the occasional now wilted field of sunflowers popping up in between random towns with random castles on random lumps of rock. In parts the landscape was a bit like the inland of Australia, the bit where expanses of golden grass meet a few clumps of green bush before it turns into red sand. Unlike Australia though, wind turbines and solar panels were far more common and these, along with the magnum ice cream from the service station provided some respite from the boredom. 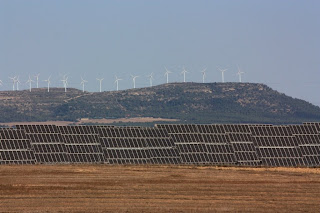 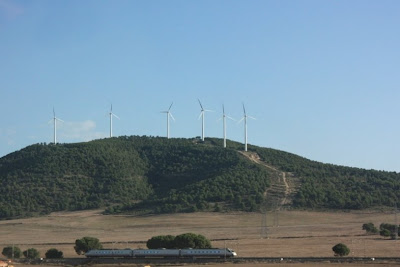 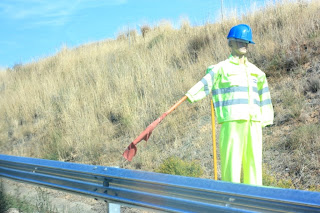 More common than wind turbines however were traffic cones and roadworks, entire sections of the road all the way up to the north being re-laid or widened or swept or just giving some Spanish people some employment. You would have thought though, with 20% unemployment, they could have used a real person instead of a mechanical dummy to wave the red warning flag.

Over four hours into the trip, things began to get interesting, approaching Madrid and with it, more roads, junctions and traffic. Just the time when you want the sat nav to do what it’s paid for and just the time for it to talk in the general vague air of a teenager and make up fictional roundabouts and roads. “Turn left if you like. I think. Then follow the thing round like the gay bull sign. Grunt, whatever. Add me on Twitter.” And so, on the equivalent of the M25, it was up to us to shout and panic and get lucky with turnings as we successfully bypassed the capital.

Through Madrid and a breather for lunch in a service station that seemed to enjoy blasting out camp disco favourites across its forecourt. Stale baguette with leftover bits of French cheese for me, the last of the delicious Comte. Meanwhile the whole car was beginning to smell like ripening Reblochon as we embarked on the second leg into the north.

Immediately out of Madrid, high mountains and something greener perked up the camera shutter a bit, before more yellow plains and wind turbines and traffic cones all the way to Burgos. The afternoon coffee a blessing in its quality and exquisite timing. 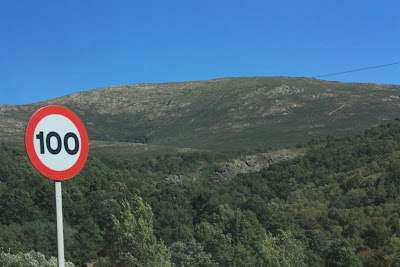 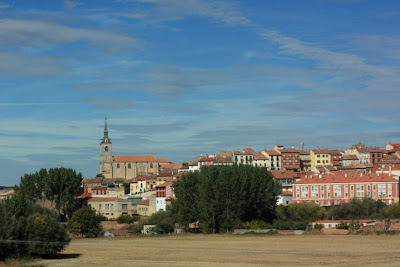 Burgos was something of a milestone, clearly in northern Spain and surely Santander would be a jolly jaunt down the hill to the coast. Two hours later we made it, a two hours of dramatically changing landscapes as hills rose, yellow gave way to green, blue gave way to grey and Spain became all Alpine for a while. The rain in Spain does not fall mainly on the plain, more accurately the northern ranges and valleys. 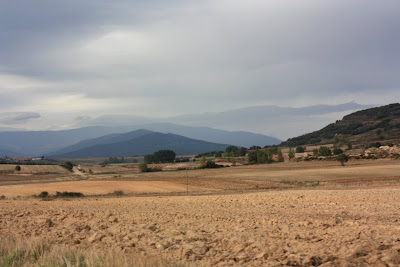 At Santander we found a pleasant enough hotel for the night near the beach, a dinner of leftover sandwiches, cold pizza and chicken followed by a mini pub crawl in order to avoid watching and not understanding one iota of Spanish TV in the hotel room.

Morning and hello Atlantic, with your proper waves and water giving weather fronts, inspiration enough to rise early before breakfast and run. Run downstairs and take my camera out with me for a gentle walk to capture the beauty and enchantment that is daybreak by the sea. 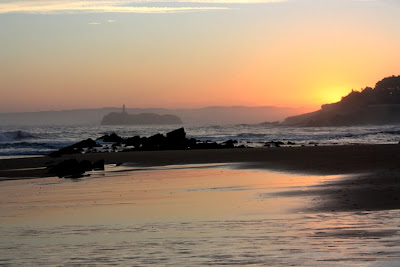 Already, in this dim light, I was liking Santander and I think primarily this was due to its Australianicity. Take out the older buildings and cluttered city and this could be any number of coastal towns along the NSW coast. Surf beaches with cafes and bathing pavilions curving around to a rising headland and its lighthouse, the waters sweeping in through the sandy banks and bays of the estuary, flowing below gentle ridges and peaks of the mountain range. Slightly surreal, it was like a little reminder of Australia within the hubbub and eclectic surrounds of Europe.

After breakfast, Mum and I explored a little more of this on foot, taking in the headland I spied earlier in the morning glow. We could have gone round in a little tourist train, but walked both ocean and estuary side on what was turning into a rather fine, warm day. 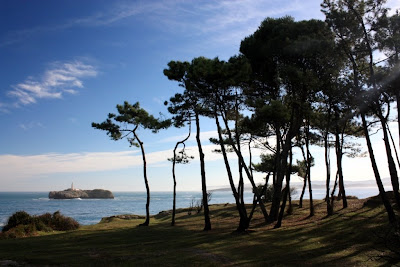 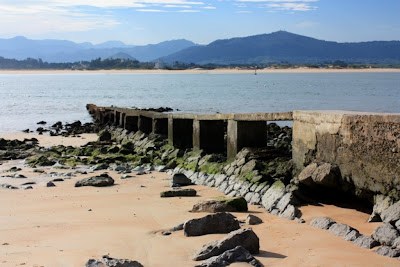 The town part of Santander itself was less inspiring, much less Australian, but pleasant enough nonetheless, with opportunities for gentle ambling and nice food. One of the good things was that the port, and docking point for the ferry, was right in the heart of town and you could park the car up and leave it to explore on foot. There’s only so much exploring you can do though, pacing a few streets before some yummy lunch. Worryingly for what lay ahead, we were summonsed inside due to windy gusts blasting the coffees and patrons alfresco.

Now for the most boring part of this adventure, but very apt for leaving Spain and reacclimatising to Britain: queuing. Sat in the car waiting and waiting for boarding of the Pont Aven to commence, there was little to do other than staring, fiddling, thumb twiddling and changing radio stations at every available opportunity.

------------------------------------------
Welcome aboard me hearties, or actually bienvenue monsieur, we are heading from Spain to England but speaking French and not retiring at 62, even though we work less than everyone else due to endless striking anyway. Thankfully working today though, leaving late afternoon and a perfect time to sit back on deck with a beer and watch Spain disappear.

It was brief, but the taste of northern Spain leaves me wanting more; less Britified than the south, green and bounteous and – yes – slightly Australian, slightly French, slightly Cornish. For others, Spain – and its blue skies – can’t come back soon enough. 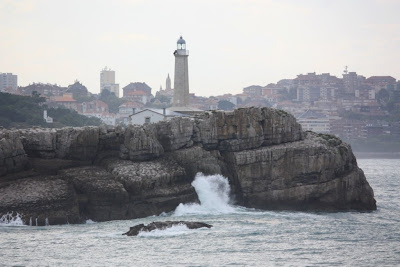 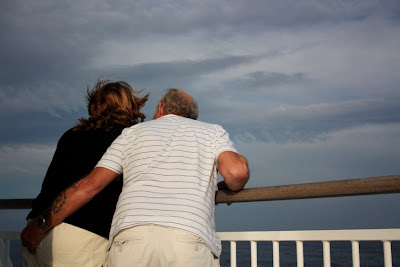 Now, not being a cruising type, what do you do for 19 hours on a boat? Play pirates? Wear a bow tie and mingle with seamen for dinner? Stroll on deck in white slacks, beige polo and yellow

jumper tied around my shoulders? Swinging in a hammock with a G&T sounds good to me. In reality, exploring the ferry took about 10 minutes. Being a French ship, there were some promising food options, but dinnertime coincided with some nice swell from the Bay of Biscay, and the wise choice was a bland baguette on deck. Mum was feeling the worse for wear, I found G&Ts helped and all we could do to keep dinner from returning was concentrate on the sun falling into the ocean.

Beyond that, darkness and lurching through the night, the clunking noise of the ship eclipsed only by never-ending snoring and, in between, sweet dreams ahead of a placid sea and the city of Plymouth greeting me in honorary sunlight. 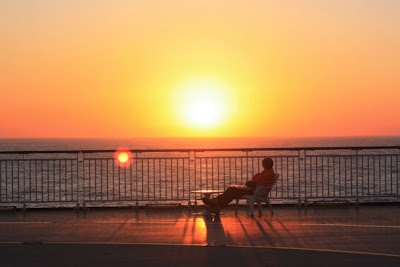