One of the more prolific trends during 1800s Australia, alongside highway robberies, gold rushes and virtual genocide, was the naming of landscapes in a distinctly European vein. While this approach was hardly any more original than the naming-something-the-bleeding obvious method (Great Sandy Desert, Seven Mile Beach, Hill Top, Big Drongo Land etc), it sure beats the naming-something-after-myself-out-of-pure-egotism way (Macquarie Park, Macquarie Point, Macquarie Island, Port Macquarie, Macquarie Heads, Macquarie Pass and so, so, on). The challenge with it, however, was drawing a parallel between what was in front of them, and a suitably named European equivalent.

The Alps bring forth a scene of glacial streams spiriting down blissful green valleys, cowbells echoing off the face of mountainous, snow-capped hulks, a land of buxom maids, alpenhorns and big tankards of frothy beer in the afternoon sun. Perhaps it was in a somewhat wistful hope that the Australian Alps came to be named, a product of a yearning for home, with its buxom maids and frothy beers.

And while it's true that the 'Alps Down Under' have most of the same ingredients, it seems they have been churned up in the maker’s mixer and dolloped out into a different, somewhat flatter, cake. A vast expanse of rounded ridges and folds tangled with snow gums, button grass hollows and eucalypt valleys, they are distinctly Australian.

It was perhaps with a touch of this same yearning that I spent a few days in this landscape, turning each corner in the hope of emerging into a green meadow bursting with wildflowers, a huge expanse of rock rising into the skies, or, yes, a buxom wench serving me a beer...

Base camp#1 was Albury, on the Murray River border with Victoria and flanked by what you may generously term Alpine foothills. I have been to several of these towns over the years and with each visit my general disorientation seems to increase. The problem is they all get mixed up in my head: streets in Cowra blend with memories of the car park in Albury get befuddled with which block that coffee shop was on in Ballarat get confused with where the mall is in Wagga. The town hall, post office and railway station generally look the same, so provide little help in orientation, but the upside to all this is you get to roam in a vague blissful ignorance and discover things as you go. The small, but perfectly formed, botanic gardens in Albury was one such peaceful gem discovered. The large, and perfectly formed, pork belly with apple slaw salad another.

After completing some substantial work-related errands in Albury I was free to cross the border and head down into the bushranger territory of Northeast Victoria. The hotspot of this is Glenrowan, the town where Ned Kelly put an empty paint tin on his head and stumbled out of the bush into a hail of officious bullets. Today Glenrowan survives on this legacy, though on a bleak, cold and windy Friday, it seemed to be barely hanging on. Perhaps the sight of a giant man pointing a gun at you as you pass on the highway is enough to scare people off. For me, it was the main attraction.

Of more appeal in the scheme of life is the nearby village of Milawa, principally because it is home to Milawa Cheese. Now here we are inching into more traditional Alpine territory, though it was a shame they didn’t have any really strong nutty Alpine style cheeses as such. I tasted about ten, and there was no Gruyere or Comte equivalent, though a goat’s milk Tomme provided some joie de vivre and a creamy blue added a suitably stinky bite. Feasting up, an impromptu end of day walk was quite a delight in the ranges of Warby Ovens National Park, seemingly the last significant foothills before the fertile plains of Sunraysia take over. 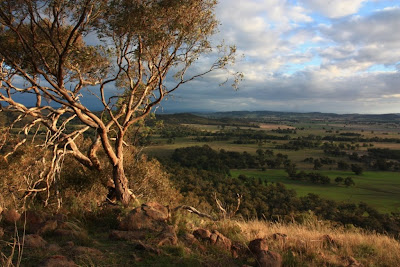 Basecamp#2 was a cheery place called Bright. Situated in the narrowing Ovens Valley, it has the essence of an Alpine village and an undoubted charm and beauty. In many parts this is thanks to its very generous planting of deciduous, broad leafed trees which will be aflame in coming weeks.

Here, the valley indeed starts to take on Alpine proportions, with Mount Buffalo rising considerably and the ranges of Alpine National Park – Mount Bogong, Feathertop and Hotham, springing up to the east. And while this wilderness surrounds, the town and valley possess that warming, comforting sunny blanket of civility and contentment which is so typical of Alpine villages.
By contrast, Mount Buffalo was indeed a beast. A rise in altitude on a stunning piece of road meant heads were in the clouds and a chill, eerie gloom enveloped the landscape. I was reminded of a journey to Hurricane Ridge in Olympic National Park in the US, a climb with no reward other than a sense of being the only soul in a world that probably exists but which you cannot be sure of because it cannot be seen. While there was no snow here, temperatures seemed equivalent with Hurricane Ridge, a wind chill producing the beanies and gloves from the bottom of the bag. Not really a place for a picnic lunch of chicken and salad you would think, but it was wonderfully tasty and coincided with that magical lift in clouds and colour that is all the more rewarding when you have been cloaked in grey. 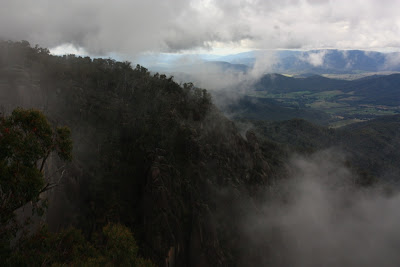 A similar procedure followed the next day, arising in a shiny Bright and taking another picturesque road along the ever-enclosing valley of the Ovens and upward towards Mount Hotham. Here the Razorback promised much; its name simply alluring enough to get out on foot and strike out along its spine towards Mount Feathertop. While not exactly as precipitous as its name suggests, there were times where the Razorback track crested hills and ridges and offered extensive views to the left and right. Such times were not this morning however, the clouds rolling in from the west obscuring much that was around, bar a few gaps created in the weather window of the mountains.

It can be a frustrating experience, seemingly fruitless as you plough through murk, every step down foreboding in the knowledge that it will be up on the way back. Such weather teases and taunts, with occasional glows of sun filtering though the milky whiteness, then vanishing again, the snippets of valley filtering in and out like a distant radio station on a remote drive through the outback. It brings hope, hope that one of these breaks will penetrate the cloud, burn it away for good, and reveal a world which is immense in its endlessness. Happily this occurred while eating late lunch, in the shadow of Mount Feathertop, and elevating the return route along the same path from a miserable trudge to a marvellous jaunt in the happiness that is seeing blue sky. 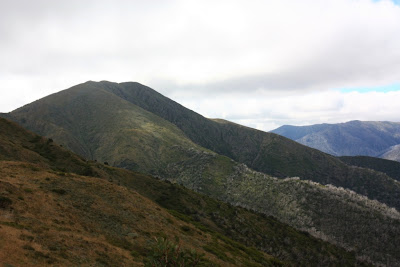 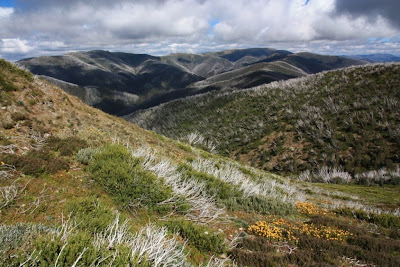 A new day appeared to dispel all cloud in the morning, providing a sunny drive out of Victoria and into New South Wales.

From Bright there was one final scenic road to take, summiting with views over the Kiewa Valley and Mount Bogong. Following the valley into pastoral splendour – I’m sure I have eaten something deliciously creamy from this part of the world – a circle was almost completed as Albury nears.
You could say Yackandandah is a mouthful to say and you could also say it is practically a suburb of Albury, or at least its Victorian counterpart, Wodonga.

It would be one of those places you might head for a Sunday drive, pottering about for trinkets in its little high street and having a feed in its authentically wooden and pleasingly compact pub. Today it was a very convenient toilet stop and reminder of the extra warmth associated with a lower altitude.
This warmth continued as the car headed back eastwards and arrived at Corryong for some lunch, where it was reaching acceptable shorts weather. This is the western gateway to Kosciusko National Park and the approach from here is quite different to the more frequented eastern entrances. From lusher valleys and forested floors, the Main Range rises up in a relatively short distance to its exposed expanse of hills and rocky peaks. While obviously not snow-capped at this time of year, the rise from the valley floor provides some semblance of the Alpine. 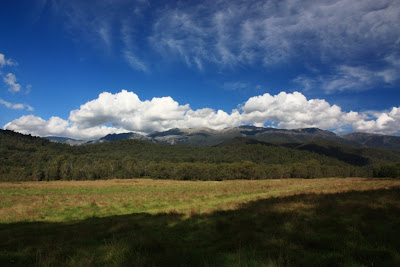 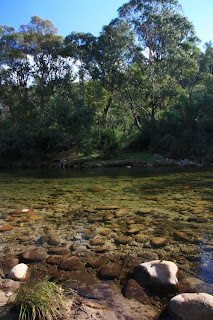 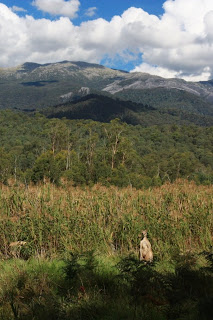 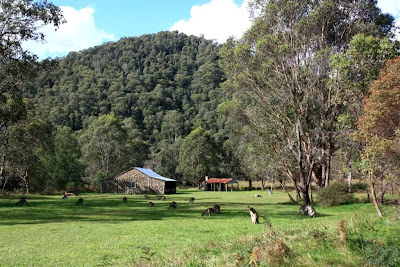 The valley in question is cut by several tributaries feeding into the Murray River. Being beside one – the Swampy Plains River at Geehi Flats – on a warm Monday afternoon, with sunlight dappling through the trees while everyone else is working, is a rather fine feeling. This is the setting for a spacious and rambling national park campground, proving again that free accommodation is often the best. Thus the rest of the day was filled with a potter along the river and plains, a read and snooze by the soothing opaque water, and a camp stove feast of sausages followed by hot chocolate beside the wood hungry fire.

Probably the least pleasant part about camping is the camping part, as a chilly night was hard going when it came to comforting sleep.

However, much like cloud clearing on a mountain ridge, the pleasure of a rekindled and heavily refuelled fire along with a breakfast of bacon and eggs is elevated following the pain of the night that passed. Fitful sleep and chilly noses are forgotten in the glow of red cheeks and deeply satisfied stomachs.
And while not in terms of altitude, that was the high of the Alpine trip. The rest of the day required a journey back to Canberra which was niggled by road closures and work, and increased in tedium as familiar ground got clocked up. Place names were once again familiar as the capital sprung forth, from Indigenous sites to Prime Ministerial suburbs and to old Captain Cook Crescent itself. So named because it reminded early settlers of Captain Cook’s behind. Or something to that effect. Like the Alps, I can see the resemblance!
Posted by Neilio at 5:22 pm