Another half year down, and it’s not just noticeable for the obnoxiously irritating adverts flogging gear to dodge tax. The upside-down southern hemisphere has had its winter equinox, meaning that despite getting progressively colder at least you can enjoy the cold with slightly more daylight. It’s a year since nerds were out and political redheads were once popular. And it’s now just one month of work left before embarking on the annual quest for clotted cream, smelly cheese and – this year – a few extras like crispy fried chicken heads and nu yark bagels and maybe even Outback Steakhouse for that authentic Aussie experience good day mate, yes it is strewth of a billy mate. How is it going?
A genuine Aussie experience is dangling your legs off a sandstone precipice with a million and one gum trees coating the folds and creases of a landscape so vast and untouchable

it is almost bewildering to comprehend. Despite not being blue neither technically mountains, the Blue Mountains are why Australia should be cherished and celebrated, not a cork hat or a stubby holder or cuddly clip on koala. 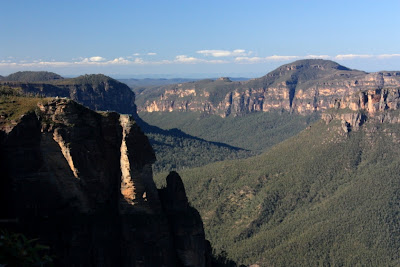 A working requirement for Monday planted a seed for a weekend visit, the clear blue skies encouraging the brain and body to point the Magna in the general direction on Saturday morning, and the Magna deciding to take an alternative inland route just for a change. It was an okay change, and there was tarmac all the way, so at least a solid surface to squeeze past logging trucks between Goulburn and Oberon. From Oberon, the landscape stepped up a mark, the road skirting the extremely lengthy Megalong Valley and climbing up the Blue Mountains plateau from the west, eventually spitting me out at Govetts Leap. A lookout! How I love lookouts. Even a road sign for a lookout is thrilling, the anticipation of, er, looking out and all that. 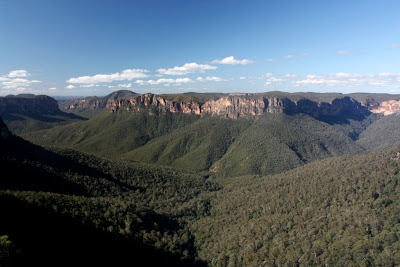 Sat here I had my lunch of leftover pasta and for once it seemed to do what pasta is famed for doing and give a rather uncharacteristic boundless energy. Useful for the walk around to Pulpit Rock, especially the first kilometre which was down slippy steps then up similar but slightly less slippy and more gargantuan style steps. You know the ones, where you have to raise your whole leg pretty much the height of your leg to get up it and pray you are not wearing skinny jeans.
The rest of the walk was bliss though, the sun rather warming, the path drier and with fewer gradients to get in the way of happy times. The regular views over the Grose Valley only interrupted by serene forest growth and lyrebird repertoires. Even the walk back along the same path was not too much of a chore, the steps somewhat less annoying but the finish a bit of a breathtaker that’s for sure. 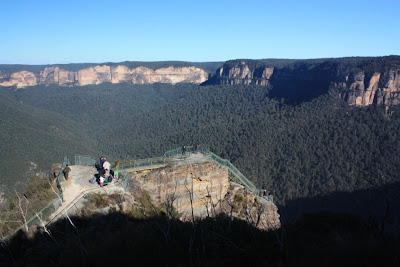 Sunday was a huge day of transition, from the mountains to the sea, with a touch of the old food treat escapades chucked in for good measure. While most normal people would have a nice lie in and drink tea on a Sunday morning, I was up at 6am, driving to Sublime Point, so named because it is a piece of rock that sits out (a la point), and is undoubtedly rather amazing, sublime you could say. I was after some of those mist in valley, red sunrays on rock type of shots. I wasn’t so keen on the chill wind gusts that came with it, but the bellbirds and I liked it a lot anyway. 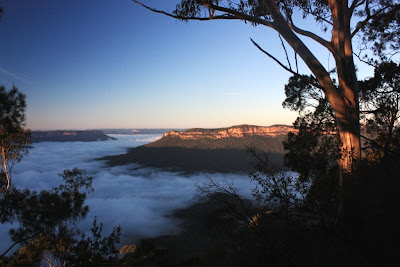 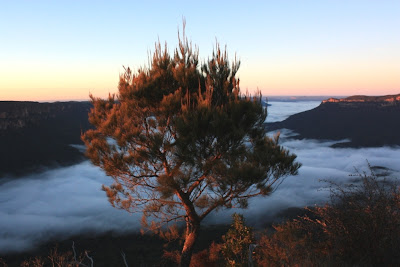 In the distance, the famous three sisters – Beryl, Ethel and Maude – were shining like three old dears after a few Sherries and a night out to watch the Chippendales. They were also, like a lot of their cohort, extremely windy, somewhere you didn’t really want to dwell but were intrigued to spend a bit of time with nonetheless. A fitting point to say farewell to the mountains that aren’t really mountains and head down their non-mountainous inclines to Sydney...
...Where second breakfast was waiting courtesy of that favourite little spot in Coogee. Here the blue skies were just as blue and the post-winter solstice temperature was inching its way up to 21 degrees. There is nothing better to do on such days in this city than to get out on the water, that rather well known patch of liquid that spreads its watery fingers in all directions. A regal way to travel on it via the ferry from Watsons Bay, alongside the blend of unattainable wealth and accessible picnic spots, to Circular Quay.

Which isn’t technically circular, but what does that matter. The Blue Mountains aren’t blue or mountains, and they turned out okay. You gotta love a place where you can watch the sun come up in the mountains and go down in the sea. Slightly later than usual too. 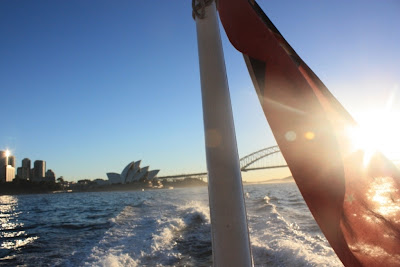