Making it across the Tasman the south island of New Zealand spanned out far below, the snow capped chain of the Southern Alps fading away south as far as the eye could see from the vantage of 30,000 feet. Arriving in Christchurch was something of a surprise, in more ways than one. Warmer than the Sydney left behind, the taxi through the tidy suburbs suggested little of the devastation still being tackled in the red zone of the city centre. It remains heartbreaking and unfathomable to gauge – the heart of the city, Cathedral Square, fenced off in a melee of rubble and girders, dust and the remnants of things as they were left some two years ago, seconds before the big one hit. It’s an eerie tourist attraction, one in which you feel intrusive and alien, amazed and aghast. 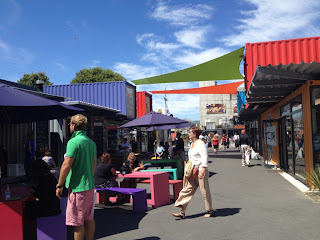 The soul of the city has been ripped out but its heart remains. Amazing opportunities come with rebirth and Christchurch is painstakingly getting there. At the top of the tree is Re:START, the replacement to the shopping mall made up of a quirky arrangement of shipping containers, full of neat stores and handy coffee and cake fixes. I’m sure I’m not the first to say that I hope this becomes a permanent feature; tribute, testament and refreshing alternative to big bland Westfields all over the world.
Pleasingly the natural world of Hagley Park and the Botanic Gardens has less of the taint afflicting the man-made Christchurch. This is a reminder of the gracious, sedate city that often leads to the city being proclaimed the most English outside of England. You can see it in places, with soft grassy lawns (unlike that harsh, spiky Australian rubbish!), punting on the Avon in blazers and boating hats, plus a penchant for Cadburys and availability of Twiglets. Needless to say, on warm summer days, meandering through the gardens and lawns under shady trees are of huge appeal. 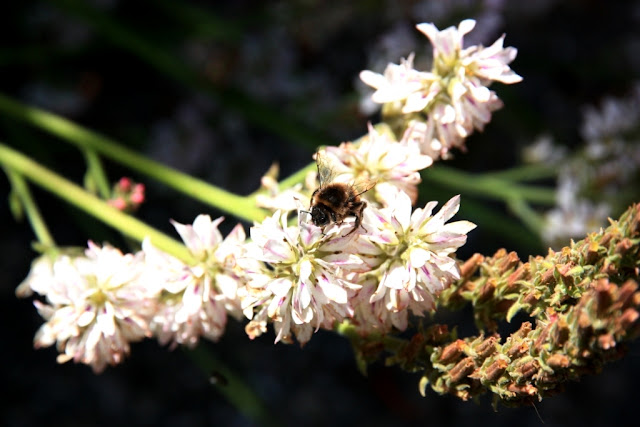 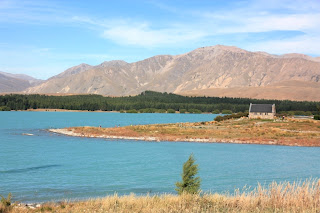 Leaving Christchurch the landscape soon enough becomes less refined and in no way English-like, apart from a few scattered towns and villages offering rose gardens and afternoon teas and, in the case of the charming town of Geraldine, coffee and walnut fudge slices. The Canterbury plains are cut by the now dry glacial riverbeds threading their way down from Mount Hutt and the surrounding ranges. Dry, brown hills are liberally sprinkled with sheep, while rocky hills mark the outline of lakes and signify impending Alpine peaks. Lake Tekapo is the first big milestone, where the barren land meets the vivid glacial water and provides a perfect first night stop for the first campground sausage cook up. 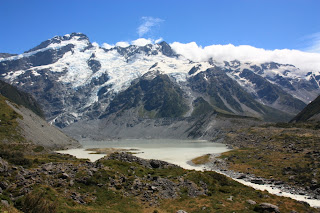 Another cook was up and out the next day, rising in the distance above Lake Pukaki and providing a mesmerising focus for the length of bitumen and walking track approaching it. Mount Cook, or, as we like to call but not pronounce it, Aoraki, rose above the splendid landscape of the Hooker Valley on the first big walk of the trip, its snowy tip sparkling in glorious sunshine. With swing bridges, lakes, and raging rivers, the walk to Hooker Lake, there and back again, was the first taste of that real pure NZ so famed in the movies. 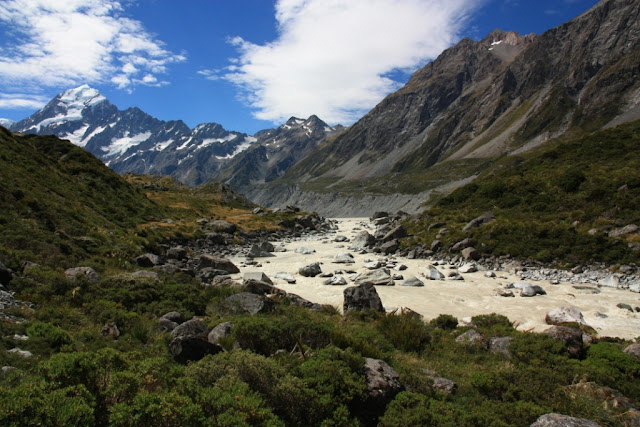 Towards the end of the day, Aoraki disappeared into cloud and the patchy raindrops escalated into a thoroughly soggy night. A saving grace was the dampener this put on those crazy young Germans and their very likely crazy partying. The rain continued on and off into the next day, a cloudy, miserable scene as we left the high ground and heading back to the coast and down towards Dunedin. An Edinburgh of the south and with the weather to boot. One bright spot were the fish and chips overlooking the sea and the somewhat bizarre and appealingly photogenic Moeraki Boulders. 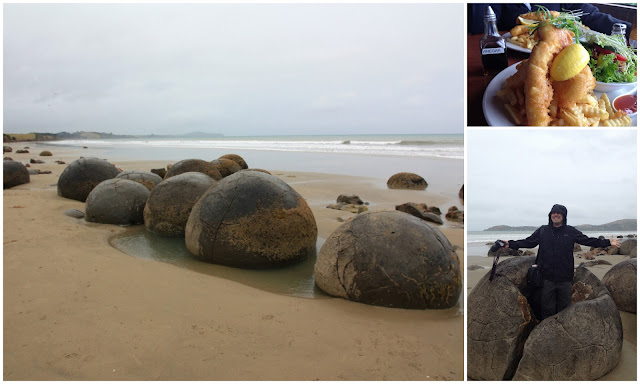 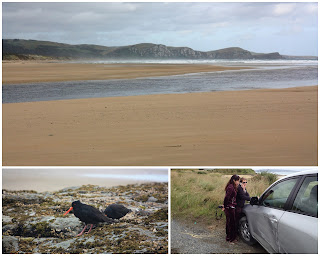 The somewhat bizarre continued into the next day, as we headed deeper into the darker south of the country and the no doubt heavily banjo plucked landscape of The Catlins between Dunedin and Invercargill. Among the treats in store were a trip to the Countdown supermarket, inevitably accompanied by a certain theme tune blurting out of your mouth as you browse the carrots, roast chicken rolls buffeted by the wind, Cadbury’s Crazy chocolate, a trip to some funny rocks and a raggedy headland. There was also a choice encounter with some Chinese tourists and a Kiwi farmer. Acting as saviours to the Chinese, who had lost control of their car and spun into a field, somehow translating the incident with the aid of dodgy doodles and hoping that the AA man would turn up, and trying to ignore the dopey farmer who was more worried about the death of one of his fence posts.
It would be fair to say that the trip had reached a bit of a lull, a dip from the heights of Aoraki and a cool, dreary change to the heatwave of Christchurch. To compound matters we almost ran out of petrol, on Waitangi Day, potentially stranded in a dead end town for a whole day. A walk to the only open thing in the town offered some hope but the owner had conveniently sold the only containers of petrol he had a few days previously. But he knew Nigel, who was supposed to operate the petrol pump as well as cafe and visitor centre and goodness knows what else, gave him a call, no doubt woke him up from a bleary hangover and managed to connect us to his liquid gold.

It was a turning point, as we sailed into Invercargill and avoided its concentration of liquor stores, topped up with more petrol and zoomed onwards to a random place for a coffee break. Riverton sounds like a town from Middle Earth but it exists on the road between Invercargill and Te Anau to service weary travellers, with an exemplary cafe full of scones and slices and hot drinks and cheery easy-going staff. It pushes you on inland into a country where, on this occasion, clouds finally break, temperatures climb and moods rise correspondingly. 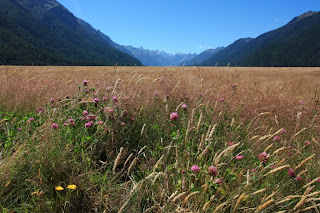 By time we reached Te Anau, which is basking on its beautiful lake, it is hard to believe where the day began. And there is nothing better to do than eat a ham sandwich by its shores and decide to embrace the day once more by venturing slowly onwards along the Milford Road into Fiordland National Park. A one way road terminating at Milford Sound and surely one of the world’s great drives full of scenic spots and dramatic vistas. Part one took us into the Eglinton Valley, an obvious battleground for prosthetic orcs and CGI wizards, passing Mirror Lakes shattered by a breeze, pausing at Lake Gunn for greater serene reflection and culminating in The Divide and a chance to hit the hills. 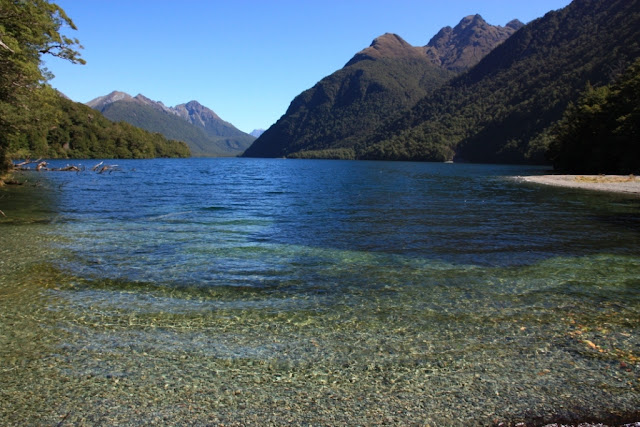 The second significant tramp of the trip remains my favourite of the lot. Partly accentuated by the contrast from how the day started, the section of the Routeburn Track from The Divide to Key Summit, was gleefully majestic. A trek where there was a bit of pain, up and up through rainforest ferns, but the reward-effort ratio was on positive side. Emerging from the forest into an alpine world of tarns and peaks, the late afternoon sun illuminating the Humboldt Range and elevating the thrill of being out of the car and out of the gloom all the more. 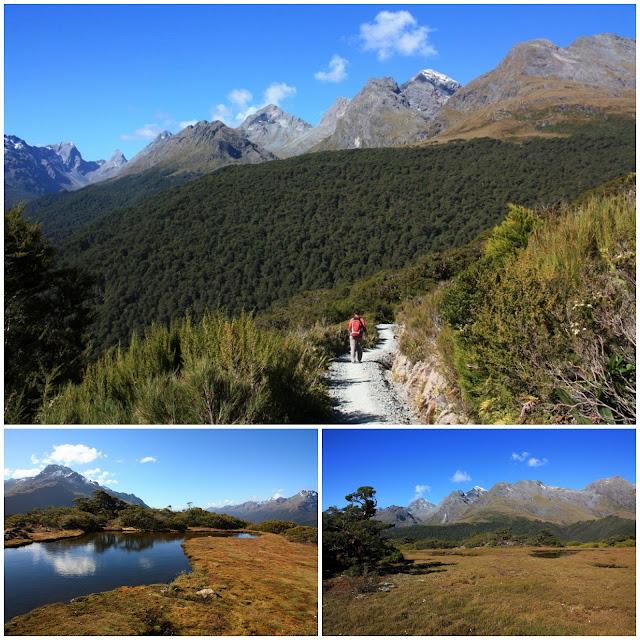 Grandeur remained the theme early the next morning, embarking on a glorious drive to the end of the Milford Road as the sun gradually emerged over mountaintops and fed its way into narrow glacial valleys. A Lord of the Rings soundtrack was at its most apt approaching the Homer Tunnel and feeding down into Milford Sound itself. Cloaked in rain and cloud every 2 out of 3 days, today it was a pleasure to be in the minority third, the Sound still and calm in the early morning as low mists flittered their way over precipitous cliffs and peaks. 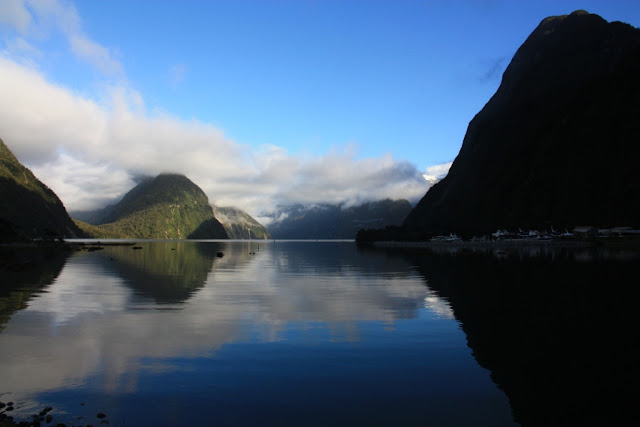 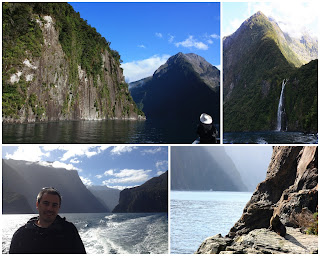 Getting out on the Sound is the best way to appreciate its scale, as cruise boats are dwarfed by giant slabs of rock that continue to plunge deep within the fiord. Seals cling to sunnier rocks, regularly paid a visit by the different boats plying their way out to the Tasman Sea and back again. Waterfalls continue to plunge into the glassy water regardless of the dry summer of 2012-13. And despite the activity of boats and kayaks and seaplanes, the scale of the environment is of such an epic proportion that human activity is barely noticeable.

The cool damp cloudiness of the south east coast was now a distant memory as the meander back from Milford Sound continued in blazing sunshine which was set to stay. Forays down dusty roads and along short walks to falls and chasms prolonged the buzz. A minor blip at the disappointing Mistletoe Lake was but a small hollow in the mountainous highs now felt after a week in New Zealand. And with the rest of the Southern Alps to explore from south to north, it was turning into one long lofty plateau.