It is true to say that there are some things that New Zealand does better than Australia. Coinage is one, logical and in order, lightweight and practical. Fortunately ice cream is another and every town or village will have a dairy selling bargain priced Tip Top as a minimum. Often two scoops cost little more than one. In the case of Te Anau, a couple of scoops in warm sun beside the lake with the satisfaction of knowing that you have (unlike in Australia) not been ripped off, is a moment of perfection. 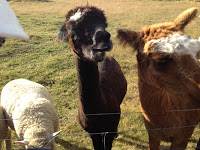 Reluctantly leaving Te Anau and heading towards Queenstown the landscape becomes more pastoral, albeit with rugged ranges and meandering rivers never far. Midway along the route the small town of Mossburn is a perfect stopover for the night with a charming country park in a charming setting. The charming owners moved here from the big city of Auckland and you can see why such a move wouldn’t have been such a bad thing. Rejuvenating and calming, the setting is pastorally idyllic, and you get to keep a few animals too.

The next day it was onwards towards Queenstown and fringing Lake Wakitipu but bypassing the city itself. There was a chance for food fuel and sedateness in nearby Arrowtown, a lovely place in which Jill and I both agreed would be nice to live in, rather than that crazy adrenaline pumped up city of  Queenstown. We had decided to make the most of the good weather, fearing it would not last, and head further on over the Crown Range to Wanaka and into Mount Aspiring National Park. For here big walk number three promised much. 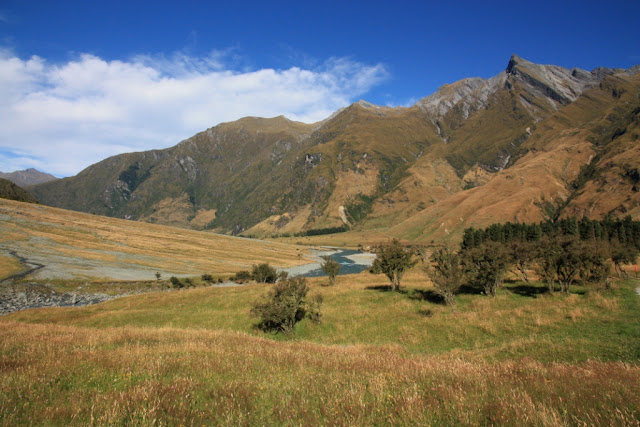 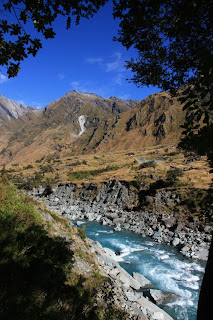 The Rob Roy walk commenced with a pre-fuelling brie and tomato tiger bread roll and then proceeded with an amiable jaunt along a glacial river valley. The valley, all grassy hollows and flowery brightness, came complete with a mandatory swing bridge, this being the wobbliest of the trip on which to cross into a shady forest of beech and fern. Thank goodness for the shade, for an uphill slog, sometimes scramble, other times grind lingered for a good few kilometres, all the time accompanied by the thrashing sound of water churning its way back down with gravity into the valley. And, when finally leaving the Beech forest, the source of the water becomes clear, as glacial meltwater plummets down from Mount Aspiring in various ways. 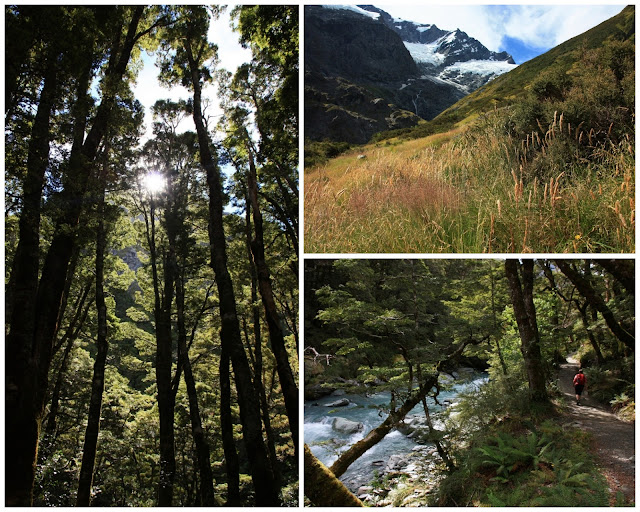 The world up here is special, made all the more so by the graft needed to get there. In another inevitable comparison with Lord of the Rings, it’s a veritable Rivendell of waterfalls, sliding their way off the mountain and scouring the high meadows before sinking their way deep into the dark, ancient forest. Sadly, like many of these walks it is a there and back again, but the descent pleasing and only serving to propel the sense of achievement at having climbed so much. 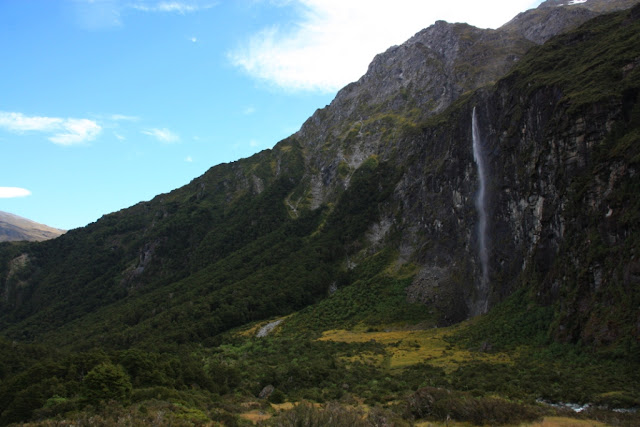 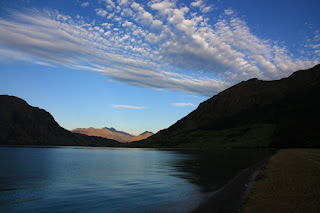 While the walking was not so circular the driving made up for that. Following a night beside Lake Hawea, the plan the next day was to loop back to Queenstown on a different road and return, once more, to Wanaka. This road was a little more mundane, though did offer the chance for a bungy stop at Karawau Bridge. It was a terrifying moment...ordering a coffee and waiting for some random to jump. But I made it through, and ventured on to Queenstown. 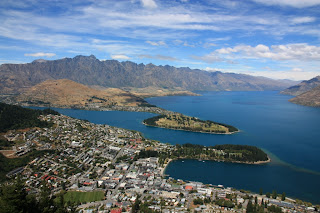 The ‘big smoke’ of the region, Queenstown had a holiday resort vibe, though given its enviable surroundings it retained an air of charm and grace. While there was many a shop for binge drinking base jumping into a jet boat, there was also bowls in the Botanic Gardens and lakeside pubs and cafes in which to lounge in an air of civility. It was nice to lounge in an air of civility for a while and though the pork belly salad was disappointing, the Tip Top at the top of the gondola made up for it. In looking to budget, it was agreed a diet of ice cream would go a long way to saving the pennies and meeting certain dietary requirements. It should therefore be sought out wherever possible.
Civility was in short supply in a forgettable night at a shabby campground just outside of Wanaka. Its lakeside setting was a highlight, but extra charges for grimy showers, crappy laundry tokens and a plethora of bogans made it officially the worst private campground of the trip. So, to get over it, we headed into town to the Speight’s Ale House for steak and lamb. We may now have to eat even more ice cream to keep the budget contained.
And so the next morning we were pleased to move on and touch new ground once again, heading as we were towards the West Coast. Rain that was threatened seemed a long way off, and it was difficult not to pinch myself as we drove through such incredible scenery in such delectable, deep blue skies. Passing Lake Hawea for one last time, there was a genteel touch of the Lake District about it, serene waters bathed in early sunlight and fringed by sumptuous hills and meadows. 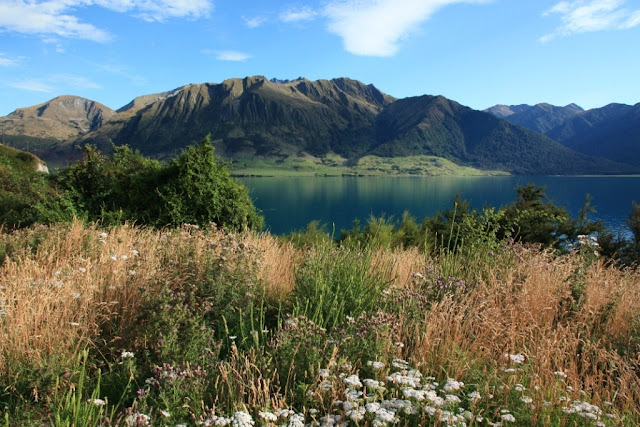 The vegetation changes were noticeable as we went into the west, inching into deeper, greener forest and losing its Lake District tone. A stop at Blue Pools offered up the first in a day of five walks, down to some pools on the river that are blue, hence how they got their name. Naturally.
From there it was through Haast Pass and officially into Westland. Still the cloud and rain was absent, which seemed strange in what is often regarded as ‘Wetland’, and at the mercy of coastal moisture unprotected by the mountains. I had images of going over the pass and plunging into thick, moisture laden cloud but, by time we reached the milestone of the coast, it was, again, a shorts and sandals kind of day.
There was greater humidity here though and this created a few clouds up and around the high mountains. Unfortunately this meant that a classic view of Mount Cook, reflected in Lake Matheson, was obscured. For a view of what this looks like on a clear day, please visit my friends Jenn and Ollie and ask to use their bathroom! Lake Matheson however was pleasant, providing the second ramble of the day, which was circular (hooray!) and a picnic table for one of the finest ham sandwich lunches of the trip.
Nearby, Fox Glacier gave us walk number three, though this was probably the lowest ranked jaunt of the five. The problem with glacial moraine is that it is typically barren and dirty, rocky and steep. I knew this but we kind of did the walk out of a sense of obligation anyway. It’s what you do when you are here, unless you have many hundreds of dollars to take a helicopter. Many other people didn’t have many hundreds of dollars either, and the walk was something of a tourist procession to take a few snaps and, inevitably, head back again. 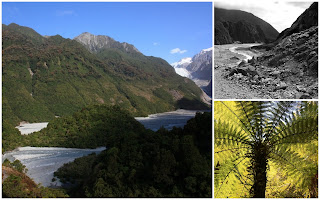 After an ice cream (of course...it was a hot day and we were keen to budget), we decided at Franz Josef Glacier to admire it from afar, and this proved a much more pleasing outlook. Given it was later in the day and most coach parties would be on the road somewhere by now this glacier experience was much more like it. And walk numbers four and five provided lovely views of the valley and, recompense for Lake Matheson, a fine reflection at Peter’s Pool. And at Sentinel Rock, another day, in fact another few days, were ending on a high... 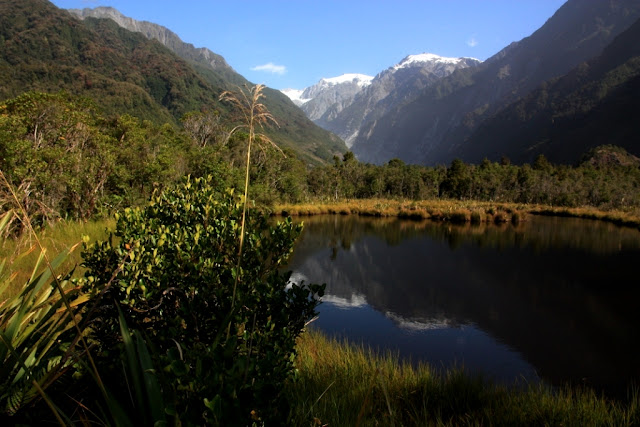